From prisoners to mercenaries to high school kids, last year had some wonderful male characters. I never finished this post then, but coming back now, I can really see who’s actually stayed memorable to me.

My top five list only includes a single character per anime, but I have honorable mentions included because there was multiple anime that just had too much male goodness. ❤

Top: Worick. Oh sweet, smooth talking, hurting Worick from “Gangsta.”. Definitely a great character, and an excellent pair with fellow mercenary Nicholas. Also did I mention I have a thing for eye patches?

Left: Decim. The emotionless bartender from “Death Parade”. I enjoyed his stoic attitude and observations of humans who entered his world.

Middle: Kiyoshi. Ahhh, Kiyoshi, the most normal of the “Prison School” boys, even if he’s still a major perv. XD I loved all the boys, but Kiyoshi is memorable for his friendship with the guys and crush on cute Chiyo-chan.

Right: Suna. The ultimate wing-man, the best of bros. Just ugh, Suna is the ultimate best friend. Just watch “My Love Story!!“ to see the cinnamon roll for yourself. ❤

To be honest, my top three are actually pretty interchangeable, depending on my mood. But let’s see how I feel today. XD

Immediately lovable, Soma is plucky, spirited, competitive and skillful, but he’s quite mature for his age. He rarely throws his competition under the bus or hurls attitude at them. He’s also encouraging of his fellow team mates, taking time to help his friend Megumi learn the secrets of concentration and beating nerves. Soma is definitely one of the most enjoyable and charismatic shounen leads I’ve seen yet.

ZAPP. MY MAN ZAPP. This guy was hysterical. Ok, the entirety of “Kekkai Sensen” aka “Blood Blockade Battlefront” was a hoot and an utter adventure. Zapp was my favorite character though, out of a fantastic cluster of wonderful characters. He was boorish, a gluttonous pig who could eat so much that his girth would swell up three times its normal size, and his private life was full of irresponsible choices. And yet he’d still come into superpower work and risk his life for the people of New York and his friends. I just love characters like this. Also did I mention HE WAS A COMPLETE HOOT TO WATCH?! 😉 This cute adorable guy though. “Ore Monogatari!!” was my second favorite anime of 2015, big thanks to the stupidly sweet romance between Yamato and wonderful Takeo.  Humble and unable to see his own goodness, Takeo was an instantly lovable character. Especially as we see him through Yamato’s eyes. He’s a loyal friend, very earnest, sweetly naïve, hard-working, and tender-hearted to a fault; a guy after my heart. Who’s kidding around, this guy’s a sex pot. XD Ok, ok, that aside: Nicholas stole my heart for many reasons besides being the super powered mercenary that he is. His tragic back story and special connections to fellow mercenary Worrick, the rescued Alex, and friendly little nurse, Nina, revealed a glimmer of heart beneath the rough exterior. Nicholas is also memorable for being one of the most realistic representations of a deaf person, between his speech, use of sign language, and sight-reading.  And frankly, he’s simply an utterly sexy badass. Can anyone blame me?! 😉 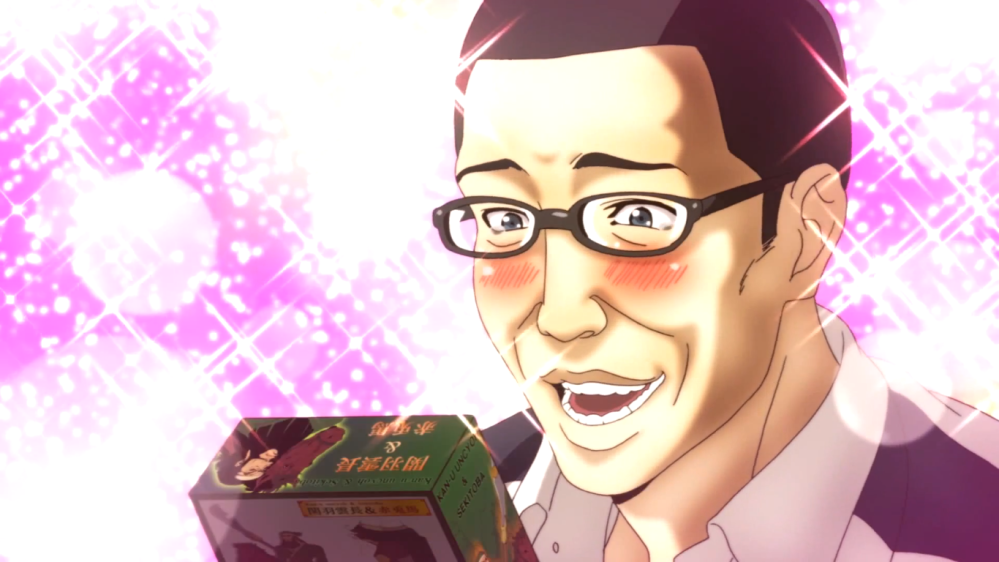 GAKUTO-DONO. The most enjoyable, hysterical character of the year for me. He’s a mastermind strategist, a hardcore Three Kingdoms nerd to the extreme, an incredibly intense individual, and a perv just like his friend. But above all, he receives incredible character development and exploration throughout the story. He went from being completely self-focused and selfish, to giving all–LITERALLY ALL–for his friends. It was incredibly warming. Plus, he was AN ABSOLUTE HOOT. XD PLUS, he’s actually super cute with his head shaved; he even had the best three seconds of fanservice the entire year. So yeah, here’s my favorite. He’s just awesome. XD

Who were your favorite male characters from 2015? Do you agree with any entries on my list?

Anime is awesome! Talk to me about it! :) Cancel reply